Background: NETs of the ovary may appear as relatively benign ovarian carcinoids or as LCNC (non-small cell carcinoma), and small cell carcinomas of the pulmonary type, both associated with poor patient prognosis. They account for only 0.5% of all NETs and 0.1% of all ovarian cancers and they are associated with a conventional surface epithelial tumor or a teratoma. Pure ovarian NETs (47%) are usually larger in size and present higher rates of metastases and carcinoid syndrome. LCNC are higher grade and more aggressive tumors than carcinoids. The most important tool for the diagnosis of  NETs is immunohistochemistry. The markers most frequently used for diagnosis of ovarian NETs include synaptophysin, chromogranin, and CD56 [8]. Surgical resection of the tumor is the cornerstone of therapy. Some treatment options for advanced or metastatic ovarian carcinoids include streptozocin, 5-fluorouracil, capecitabine, and cisplatin. Somatostatin analogues and mTOR inhibitors constitute a promising treatment option.
Case: An 80-year-old woman was admitted to our department with abdominal pain. A big cystic tumor deriving from the right ovary, as revealed in CT, mandated surgical exploration. A large cyst of 13 × 10 × 5 cm was found intraoperatively on the right ovary, and a right salpingooophorectomy was performed. The pathologoanatomical report showed a mixed ovarian neoplasm, with a  high-grade LCNC, combined with a serous borderline/atypical proliferative component. Chromogranin and CD56 (cluster of differentiation 56) were partially while synaptophysin ubiquitously expressed in the neuroendocrine cells. The patient underwent adjuvant chemotherapy, six cycles of carboplatin, and paclitaxel with no evidence of disease recurrence, almost two years later.
Conclusion: General consensus on LCNC tumors’ standard therapy has not yet been established, but early diagnosis is crucial because of the biological aggressiveness of these neoplasms. 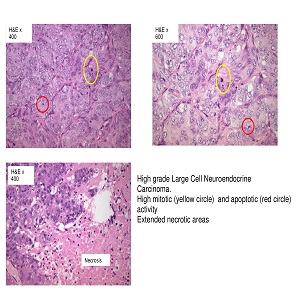 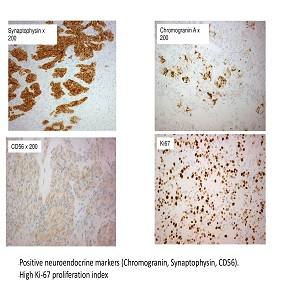